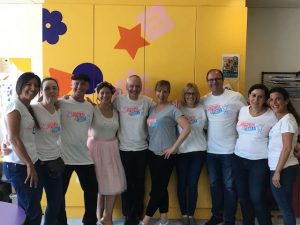 We’ve been a bit star-struck at Spread a Smile HQ recently as we have welcomed no less than three fabulous celebrities to join us on hospital visits and spread smiles at University College Hospital over the last few months. We had The Great British Bake Off’s Mel Giedroyc, X Factor’s Louisa Johnson and This Morning’s Philip Schofield.

Philip Schofield joined us on 17th October and watched magicians Ian and Paul work their magic; fairy Natalie sparkle some fairy dust; singer Collette get the recreation room rocking; and he was particularly blown away by Judge the Poet, improvising poems for the kids.

As well as witnessing the joy and laughter that Spread a Smile brings, Philip spread smiles to the faces of everyone he met. One mum told us that her 16-year-old daughter had been very upset that morning as she was in a lot of pain and she didn’t want her mum to leave her to go to work. The news that her hero Philip Schofield was coming for a surprise visit helped make it easier saying goodbye to her mum, and when her mum returned that afternoon she found her daughter singing Ed Sheeran’s ‘Shape of You’ with Collette with Philip clapping along! She said, “You have made her day. I can’t tell you what you’ve done. You have brightened her day so dramatically. We’re shaking as we’re so excited!”

Philip was so moved by the visit he honoured us with a special mention on This Morning the next day! You can watch the clip here. Thank you so much to Philip for joining us and giving up so much of your time.

On 13th June we had the pleasure of taking well-known TV personality and actress Mel Giedroyc to University College Hospital. Mel is best known for co-hosting The Great British Bake Off with her good friend Sue Perkins.

Mel first heard about Spread a Smile’s work when she co-presented the BBC’s Children in Need Appeal Show in November 2017. We reached out to her to see if she would be interested in seeing what Spread a Smile did in person.

The visit was a great success: everyone on the wards was excited to see Mel, from the patients and their families, to the nurses, doctors and hospital staff. Spread a Smile magician, Nick Einhorn, impressed Mel on the day with his magic, making her wedding ring magically appear on his own finger – luckily she got it back when the trick was finished!

Spread a Smile co-founder, Vanessa Crocker, who joined the visit, said, “Mel has a lovely sunny disposition and it was wonderful to see her sharing a laugh and a joke with patients and spreading smiles wherever she went.”

We were also delighted to welcome Louisa Johnson on 20th June to meet and sing to the young people there. Louisa won X Factor in 2015, aged just 17, and news that she was visiting was met by much excitement on the wards.

Louisa spent time chatting to the kids, having selfies and of course entertaining everyone with her beautiful voice. Louisa was a great sport, taking part in our magician’s tricks, and taking the time to chat to everyone.

One particular patient was feeling especially tired and unwell before our visit and unfortunately has felt this way for quite some time. As we left her bedside, she said, “Louisa and Spread a Smile have really cheered me up today. Thank you so much.”