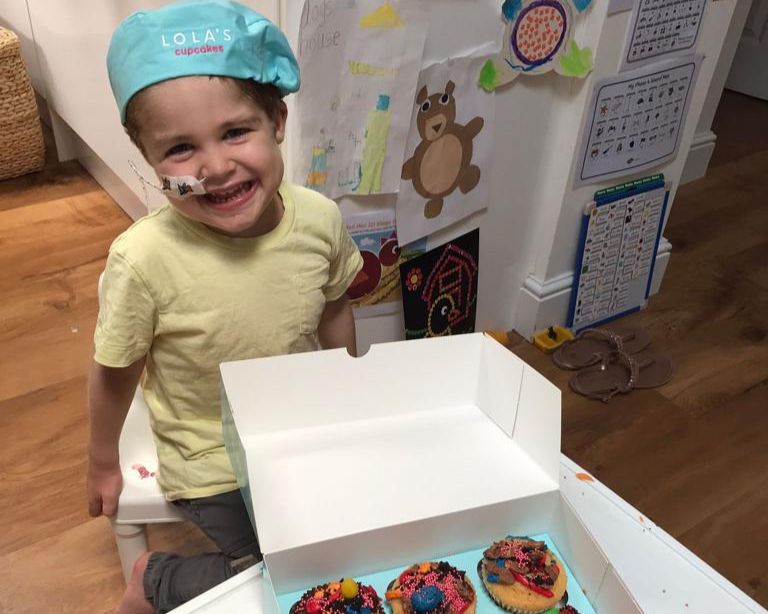 When Jacob first fell ill at 18 months old, his Mum, Emily, took him to A&E as a precaution. Unfortunately, what started as a high temperature led to an extended hospital visit and a vast number of tests in which doctors tried to understand what was wrong. Jacob went through lumber punctures, CT scans, blood and fluid tests, but still doctors struggled to find an answer for his condition.

Eventually, after having been moved to Great Ormond Street Hospital (GOSH), doctors diagnosed Hemophagocytic Lymphohistiocytosis (HLH). As a doctor told Emily at the time, “there’s more chance of winning the lottery than being diagnosed with HLH”.

The only treatment for this condition is chemotherapy and a bone marrow transplant, so the search for a donor began immediately with Jacob having a transplant in March 2019. He was then kept in isolation on Fox ward at GOSH for three months. When he eventually came home, he was still dealing with complications such as Haemolytic Anaemia, which meant he returned to the hospital often. This continued throughout 2020 and Jacob spent so much time in hospital and was reliant on blood transfusions and steroids and even had sepsis. Doctors decided at this point that he needed a second bone marrow transplant to try to improve his condition.

The transplant eventually happened around Christmas 2021. Jacob spent another two months in isolation in hospital and has been living with post-transplant complications ever since. He is still very much in isolation at home until his condition improves and Jacob and Emily still go into hospital around once a month.

We first met Jacob at GOSH when he was 18 months old when we would come and sing with him. As Emily said, “He was a baby on the bed and he’d been in hospital for 10 weeks. Someone from Spread a Smile came in to sing with him and it really brightened his day. After that he would get out of bed and walk down the corridor on Lion ward. We also did magic which helped to build his confidence.

“The virtual visits were also so important. We could never do baby classes or groups so Spread a Smile magic, art, singing and dancing kept him entertained. You have been supporting us now for four years. He even did a Lola’s cupcake decorating session – he was so ill that day but it got him out of bed to do an activity and put a huge smile on his face.”

At one point, Jacob was unable to leave his hospital room for 70 days, so the ability to bring some creativity and colour to his space was vital. That’s why we decorated the windows in his room. He gave us very exact instructions on what he wanted his window to look like, which involved his favourite characters; Sooty and Sweep riding on his favourite train. He had brought all the characters from home to make sure we got the drawing just right. We did the same for Jacob and others on Fox ward over Christmas as well.

Emily said that Jacob was so excited to come to our summer party in August 2022. This was only the second party he has been to, after he came to one of our events last year. Now being five years old, and having not experienced school or nursery, the relationships that Jacob has with our entertainers, staff and his medical team are incredibly important.

Getting to know Jacob and Emily has been wonderful, and being able to make a difference in their lives has been a real privilege. We’re excited to see Jacob again and hopefully host him at more parties to come.

Emily said, “Spread a Smile is so important to my family. Even at Christmas you sent a box of goodies. Things like that make such a difference when your child is going through such a hard time and your child is so seriously sick. There are no other organisations out there that provide the entertainment that you guys do.”

Please help ensure we can continue to support children like Jacob and their families by donating today. Thank you.

Back to Your stories