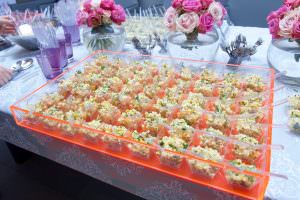 On Tuesday 14th November, husband and wife team Itamar Srulovich and Sarit Packer, creative chefs and founders of Fitzrovia restaurant Honey & Co, joined Spread a Smile for a cooking demonstration. Sarit and Itamar are known for their mouth-watering food from the Middle East, as they say, ‘the kind you find in people’s homes using the best ingredients we can get our hands on.’
For our cookery demo, Sarit and Itamar cooked up some scrumptious morsels: saffron carrot soup; madfunia – a type of chicken tagine; cauliflower shawarma; apricots and pistachio tabbouleh with orange blossom; and chocolate and olive oil mousse. The morning was an informative and relaxed affair, with Sarit and Itamar answering questions from the 82-strong audience and keeping everyone entertained with their joie de vivre!

After demonstrating how each dish was prepared and giving those attending lots of insider cooking tips to wow their dinner party guests, everyone was able to sample the dishes. The unusual preparation of the chocolate mousse with its use of olive oil was particularly intriguing, but the big hit of the morning was the ‘madfunia’ or chicken tagine.

Anita Mahatme, mum to 13-year-old Varun, was at the event to speak about how Spread a Smile had made a difference to Varun’s time in hospital while being treated for cancer. Varun was diagnosed with osteosarcoma in his spine, just before his 11th birthday. He underwent 7 months of chemotherapy at University College Hospital in London, then had two major operations at Great Ormond Street to remove the tumour and reconstruct his spine, followed by three months in America having proton radiotherapy. It was during his treatment at UCLH and GOSH that we met Varun.

Both Sarit and Itamar were born into food-loving families and have been cooking since they were five! They met working in an Italian restaurant in Tel Aviv and decided to see what London had in store for them. Sarit worked at the Michelin-starred Orrery under chef Chris Galvin, Itamar at the Oxo Tower; and later they both worked for Yotam Ottolenghi, Itamar as head chef in the Ottolenghi’s Islington deli restaurant, and Sarit opening Ottolenghi’s restaurant Nopi in Soho. Together, Sarit and Itamar set up Middle Eastern restaurant Honey & Co in Warren Street in 2012 and have been going from strength to strength ever since.

Honey & Co won Best Newcomer in the Guardian Food Monthly awards in 2013. Sarit and Itamar have also won the Jeremy Round Award for Best First Book for their book ‘Honey & Co: Food from the Middle East’ in 2015, and the Cookery Book Award at the Guild of Food Writers Awards in 2016 for ‘Honey Co: The Baking Book’. In 2016 the Honey team opened a food store, Honey & Spice, also in Warren Street, and a Middle Eastern Grill, Honey & Smoke, round the corner in Great Portland Street.

Many thanks to Sarit and Itamar for their fascinating insight into Middle Eastern cooking. Sarit said, ‘It was our pleasure to entertain Spread a Smile’s supporters with a cookery demonstration. University College Hospital is around the corner from our restaurant and we know that Spread a Smile visit there regularly and provide much-needed entertainment for children and young people.’

Thank you also to everyone who attended the cookery demo and generously donated to a raffle to raise extra funds for Spread a Smile’s work in hospitals.