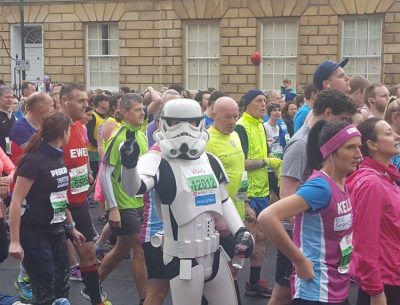 Jez Allinson, a dedicated officer of 20 years with the Royal Air Force, is now a record-breaking, Marathon running, Star Wars Stormtrooper, know as “The Running Stormtrooper!”

This year, as well as running the London Marathon in April, fully dressed as a Stormtrooper, on May 17th, Jez will run a whopping 100km (62 miles) in one day, dressed as his alter ego, the Running Stormtrooper, all the while raising funds for Spread a Smile and Make a Wish.

He first heard about Spread a Smile after watching Children in Need in November as he watched the very emotional film about a wonderful little girl called Vanessa Moss, who was in Great Ormond Street Hospital for treatment for Neuroblastoma. Vanessa went through exceptionally lengthy hospital stays and treatment and loved the entertaining Spread a Smile visits as they helped to take her mind off her treatment and how she really missed her two sisters.

Jez said, “I thought that I was ready to hang up my Stormtrooper costume. But then I watched and learnt about Spread a Smile on Children in Need and instantly I knew that I had to do more.”

To ensure that all of the 100km mileage can be safely run in one day, Jez will begin his almighty run at midnight around the Pinewood Studios complex until the sun comes up, and once daylight approaches, Jez will be running once again around Black Park.

As a result of all of Jez’s really incredible fundraising efforts for both Spread a Smile and Make a Wish, Jez has decided to beautifully call this ‘mission possible,’ Make a Star Wars Wish and Spread a Smile.

If you want to sponsor Jez, you can do so here

And you might also consider joining Jez on a virtual run to help raise even more money for Spread a Smile. Run or walk 1 mile, 5 miles, a marathon or 100k. You can sign up here, choose how far to run and when, then start raising money. You can set up a fundraising page using BT MyDonate and then all you need to do is prove that you’ve gone the distance using a fitness tracker or app and you’ll be sent a medal in the post. You may want to consider running the 5 miles, to celebrate Spread a Smile’s 5th birthday! Read more from Jez here about why he set up the Virtual Run.

We caught up with Jez to find out how the Storm Trooper obsession started.

Having spent so many years training with the RAF, Jez was already super fit, and in 2015, he decided to run the London Marathon and raise money for the wonderful charity CLIC Sargent. After this fantastic experience, Jez caught the “marathon bug” and by August of 2015, he decided that he had to run again in 2016, but this time, up his game and do something slightly different in order to gain further support, awareness and sponsorship.

This is where the idea of running the 2016 London Marathon, dressed as a Star Wars Stormtrooper, was born. Jez has been a massive Star Wars fan since the age of 5. For this particular marathon, Jez decided to support the wonderful wish granting children’s charity, Make a Wish.

Jez set about finding himself a full Stormtrooper armour and contacted a friend who works for a Star Wars favourite, Jedi News, who in turn, further put him in touch with a contact from UK Garrison. They kindly lent Jez a fantastic full costume and from the moment Jez received it, his training fully “Stormtroopered up” began in earnest!

Whilst training in Jez’s local village, naturally in full Stormtrooper costume, he was caught on camera pounding the pavements. Videos of Jez fully “Stormtroopered” went viral on the site LAD Bible, which in turn attracted a massive 2.1 million views! Well, it’s not often that you see a Stormtrooper running through your village, is it?!

During Jez’s successful training, he decided to write to Pinewood Studios, the home of Star Wars, to ask for permission to pose in costume outside their main gates. Permission was duly granted and Jez’s relationship with Pinewood Studios began.

Thankfully, the 2016 Marathon Day went incredibly well and Jez completed his almighty 26 mile challenge in 5 hours and 26 seconds, a real achievement when you understand the enormous challenge of running in the full costume.

Jez’s devotion to The Stormtrooper and marathon running continued further in 2017, which also coincided with The Star Wars 40th anniversary…when he ran both the London Marathon and his own planned 40 mile run.

In the London Marathon that year Jez was awarded the Guinness World Record for the fastest person to run a marathon dressed as a Star Wars character. Jez’s running time was an outstanding 4 hours, 59 minutes and 12 seconds. Shortly afterwards he ran 40 miles around Black Park, ending at Pinewood Studios. An achievement seriously out of this world!

Following so many marathons, training programmes, smashing records and targets, raising thousands for charity and spending countless hours pounding the pavement, Jez had thoughts on saying goodbye to his Stormtrooper outfit but was then introduced to Spread a Smile via Children in Need.

Everyone at Spread a Smile is so incredibly grateful to Jez for all of his amazing efforts, his time, his care and his dedication and we wish him so much love and luck for the massive challenge ahead. We are certain that the Running Stormtrooper will be triumphant once again and Jez, “May The Force Be With You!”