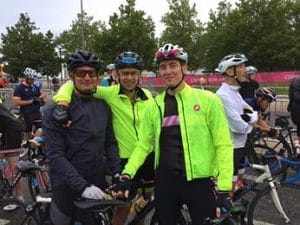 On Sunday 29 July, 8 brave men, our Smile Heroes, took part in the Prudential Ride London 100 to raise funds for Spread a Smile. Sheldon Mydat, Matthew Topp, Eran Afek, Howard Kayman, Carlos Fleury, Ludwig Von Sembach, Craig Rogers and Jon Mulder cycled 100 miles across London on closed roads in the howling wind and pouring rain, with the thought of Spread a Smile keeping them going and giving them the incentive they needed to push on and complete the race. This group of eight successfully raised several thousand pounds to help us spread smiles to seriously and terminally ill children in hospital.

We are enormously grateful to all 8 who took part and to their family and friends who turned up to cheer them on in the wind and rain.

We caught up with Craig Rogers, of Eversheds Sutherland, who told us about his race experience.

After weeks of uninterrupted sunshine, and some of the hottest temperatures on record, the UK weather decided to play a cruel trick on the weekend of the Prudential Ride 100.
In a drastic shift in weather patterns, forecasters warned of strong winds, heavy rain, lightning and thunderstorms…

When we woke at 3am (!) and made our way towards the start line at the Olympic Park, things were relatively calm – light winds and dry – everyone in high spirits. We (me, Ludwig and Jon) assembled at the start line for our 6:08 start.

We rolled across the line as they played Eye of the Tiger, and weaved our way through the Olympic Park onto the A12 (some unlucky riders already suffering punctures at that stage).

We got into a fast group and bombed past Canary Wharf, skimmed the Tower of London and through the City at an average 40 kph.

We continued at a fast but comfortable pace, past Harrods and the V&A (no time to stop at either) and out towards Hammersmith and Chiswick. Rain jackets stowed in our jerseys, we ignored the slight drizzle as we crossed the river and burned through familiar territory of Richmond Park (no rutting stags today but there was some jostling for position as we hit the first incline of the day…)

The rain grew heavier as we wound our way through South West London, past West Byfleet (where the Westens/Austen-Browns hadn’t made it out of bed to cheer us as we went past their front door…). There was a good vibe in the group as we formed alliances with groups of club riders, solos, a couple of flyers on a tandem – even a nutter spinning furiously on a Brompton!

As we got into the Surrey Hills the conditions became increasingly treacherous – steady rain and greasy, leaf-covered roads made it feel like Autumn and the descents and corners more and more technical. There were a couple of nasty looking crashes but we managed to stay out of trouble as we climbed Newlands Corner and headed toward Leith Hill.

Leith was the first real test of the day. Important to find a clean stretch of road and maintain momentum up the max 15% gradient – no personal bests today…

At the top of Leith I put my rain jacket back on – by now my light aero jersey was dripping wet, shoes and socks soaked through and glasses misted up making it hard to see; I was beginning to regret not paying proper attention to the forecast…

I got colder and colder as I descended, arms and legs shaking and I realised I was using all my energy just to stay warm. 60 miles in and 40 to go, I knew I wouldn’t be able to finish, and chances of a crash increasing.

That prompted an unscheduled pit-stop in the St John’s Ambulance tent at Westcott. My temperature had dropped to 33.5 (hypothermic) and was shaking uncontrollably. I spent 30 mins wrapped in blankets and plied with hot tea by the wonderful ladies at St John’s Ambulance. There were 4 others in there when I arrived – all suffering from hypothermia – 2 of those got the blood-wagon back to the start line. I went back out on the road, still shivering but determined to finish. I spotted a bike shop in Westcott Village where I bought a baselayer in their sale (“best £20 I ever spent”) – without which I don’t think I’d have made it to the finish line.

The pit-stop had done me good and core temperature almost back to normal, I managed to launch an attack on Box Hill, with a respectable 8:29 for the ascent.

I stopped at the feed station and from here it was (mostly) downhill back to London, forming small alliances to get some respite from the wind.

30 miles / 50 kms through home turf – Leatherhead, Oxshott, Esher, past huge crowds of supporters in Kingston, drummers in Raynes Park and up the final hill in Wimbledon. Now one of my favourite sections – bombing down through Putney at 60 clicks, over the River and into Fulham and Chelsea.

(Again we managed to stay out of trouble but saw a big prang as one rider locked-up on the Putney descent and skimmed 20 yards across the asphalt, taking another rider with him, shattered carbon littering the road).

It was getting increasingly bunched as marshals stopped us to let traffic through (downside of my unscheduled stop) but by the time we hit the Embankment we were running smoothly – trying to keep cramp out of my legs as we hit the 95 mile mark. We rolled in past the Houses of Parliament, along Whitehall past throngs of supporters and bemused tourists. At Trafalgar Square we turned left under Admiralty Arch and onto the Mall – spectators lining the road – Buckingham Palace and the finish line beyond.

I can’t say that we broke any records today but there was a palpable sense of achievement all round.

Importantly, Jon and Lud I were raising funds for *Spread a Smile* and knowing we’d raised thousands of pounds for good causes provided added incentive up the steeper climbs.

Back in Clapham, a warm shower (bliss!) a huge roast lunch and then a few pints (Rumours of “flossing” on the Northcote Road and a blow-out at Nandos afterwards are unfounded.. )

A huge thanks again to everyone for their support & sponsorship.

And for anyone considering taking part next year, we still have a few guaranteed places available in Team Spread a Smile. Please click here to complete the registration form.