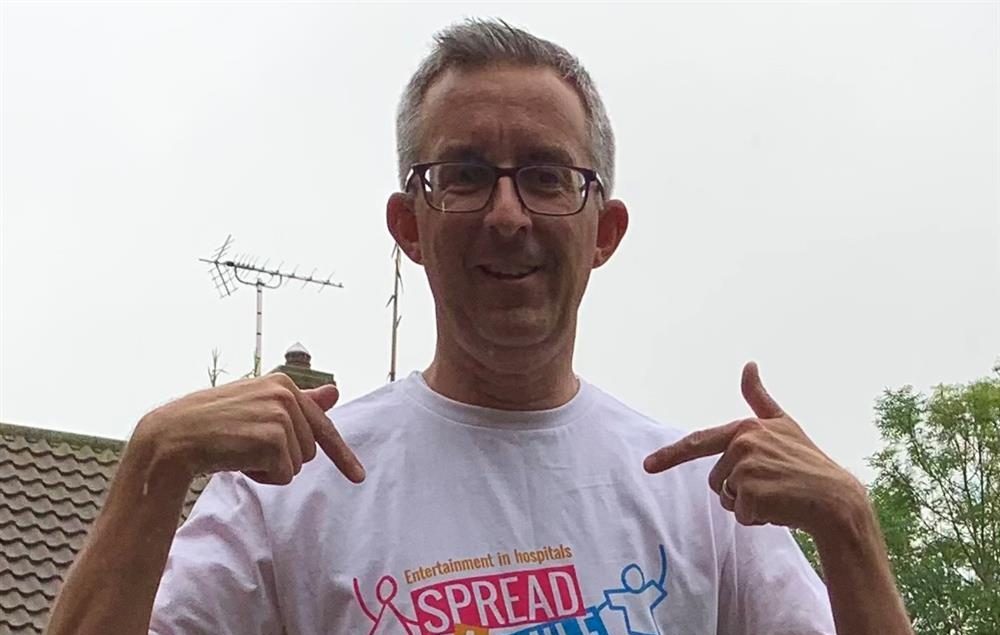 The Virgin Money London Marathon took place on Sunday 3 October. Our Spread Smile runners did amazingly well and we were so proud to be cheering them on such a lovely sunny autumn day. 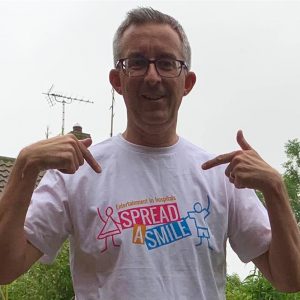 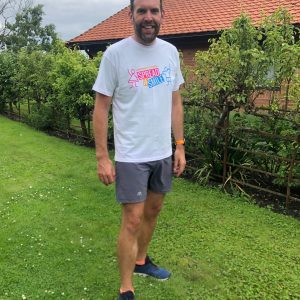 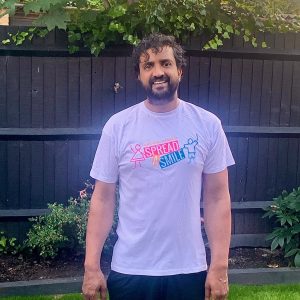 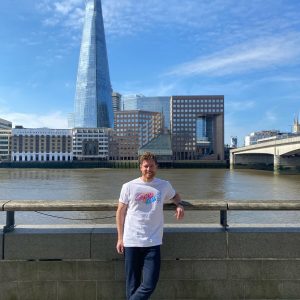 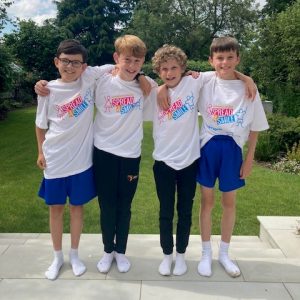 We asked our runners about their preparations for the London Marathon and why they chose to run for Spread a Smile.

When did you start running and why?

JASON: I used to run when I was a teenager, but in those days the choice of running gear was limited, there weren’t as many events or clubs to attend, and the technology wasn’t around for measuring how well you were doing.  I lost interest and didn’t run much until my late 30s/early 40s when I bought a decent pair of trainers and a running watch, and suddenly realised that this was something I could do, and that it would keep me fit as I got older.  Social media made it easier to find out about running events, and having moved home, I used my love for running to meet other people and make new friends.

MARTIN: My little sister, she’s 43 but she’ll always be my little sister! challenged me to run the Edinburgh half Marathon with her in 2014 and I just kept on running.

SIMON: I started running last year, during lockdown. I needed to feel the freedom and having moved to London 2 weeks before Lockdown started it gave me a chance to explore London in a way I might not have without lockdown.

HENRY: I’ve been running all my life  and I do it because I love being outside.

How many marathons have you run in total?

JASON: Well, officially two marathons – my first one was at Chelmsford in 2016 and then I did Edinburgh in 2019.  I also ran one in my back garden during the first lockdown, as part of my fundraising for Spread A Smile during 2020.  Oh, and a few “ultra” marathons – 52 miles in 24 hours, 75 miles over a weekend and most recently, 37 miles in December 2020 when myself and two others spent the day running between 7 of the hospitals that Spread A Smile support.  For me, though, the holy grail has always been the London Marathon, so I’m super excited about being able to do it for the first time.

MARTIN: None, this is my first, I had trained for the Manchester marathon last year but COVID got in the way and so I have been waiting for the next opportunity.

SIMON: I ran my first and what I thought would be my only marathon last year. I ran that one solo, raising money for a hostel I lived/worked at in Guatemala as the Pandemic had ruined tourism and they were left without money income for everyone that worked there.

HENRY: None, but I do cross country for my school and in Aquathon races.

How does running make you feel?

JASON: Whether it’s getting the day off to a good start or clearing my head after a day’s work, I find that the endorphins generated by exercise give me a great lift and a positive frame of mind.  When my legs ache, I remind myself that it’s not a bad thing and even if a run doesn’t go to plan, I remember that I’ve achieved more than if I hadn’t run at all.  During marathon training, I have to be careful not to overdo it, either by running too fast or too often; it’s important to let your muscles heal and the rest of your body recover between runs.

MARTIN: Mainly tired! but it is my way to just turn my head off for a few hours a week, put on a Podcast and just keep putting one foot in front of the other, its so simple.

SIMON: Pain the morning after…. Seriously though, it just gives me freedom to explore. It’s why I hate running the same route on repeat.

Have you ever wanted to give up, and how did you manage to push through?

JASON: Some days are definitely harder than others, and often it’s as much about mental strength as physical.  At the start of this year, I committed to running the same 5km run every day throughout January; on the cold days when it was pouring with rain, I had to be very disciplined to keep going but by just focussing on the next run rather than thinking about the whole month, I achieved my target.  In 2009 I did a Mud Race, which was physically the hardest thing I have ever done and I ended up with mild frostbite in my fingers – by comparison, I find running in any weather to be pretty easy.  Sometimes I remember that day, stuck in the mud, and remind myself “it could be worse”.

MARTIN: There have been times that I haven’t wanted to get out of bed early or squeeze a run in before dinner but I have made a commitment to Spread a Smile and to myself that I will run this Marathon so it will be done.

SIMON: Plenty of times. I recently had it whilst on holiday in Split, Croatia. I was doing a 90 minute run, starting at 5:30am as I had big plans that day, I was running up a 250m incline, 30 degrees and just wanted to stop but if I stopped there, all the other early mornings would be worthless.

HENRY: Not really, no!

How are you preparing for London Marathon?

JASON: Quite frantically at the moment!  I was using a training plan, which is designed to cover 16 weeks of training prior to a marathon, but I hit a problem in June when my right hip started hurting after a 9 mile run.  Despite some rest, I couldn’t shrug off the pain until I visited a chiropractor, and after six weeks of virtually no running, I had to build the miles back up carefully.  I’m now back on track but have had to increase the miles I do over a shorter period than I would have liked.  For this marathon, I’ve been thinking more about other aspects as well – such as trying to run in the mornings (similar to the time on race day) and practicing when I eat and drink during long runs.

MARTIN: I am following the same training plan that I used last year but with a few tweeks because training in the summer is a lot harder than the winter. The heat makes the longer runs much harder for me so I have to go a lot slower which can be frustrating.

SIMON: Working with a running coach to give myself training plans for me, hoping to complete it in sub 4 hours!

HENRY: I swim most days and have been running with my Mum and friends.

What’s your top tip for someone new to running and considering taking on a challenge?

JASON: Running can be both a very personal thing, and also a very social one.  By that, I mean that you don’t need anyone else in the same way as you do with team sports etc – you can choose when you run, how far you go and how fast you go.  That last point is important – how quickly you run doesn’t matter, and you should build up your distance, speed and confidence over a long period.  One way to get started is to go along to parkrun events, that take place around the country on Saturday mornings.  I help to organise one of these, and they are free and open to everyone whether you are walking or running.  The distance is 5 km, and over a period of weeks you can see how you are progressing and meet like-minded people who will encourage you to keep going.  If you aren’t very fit, or confident about running, the support of others can make a huge difference.

MARTIN: Get your Gait analysed, and the right trainers for your style of running. they don’t need to be really expensive but getting them right will help you to stay injury free and keep going.

SIMON: Don’t worry about time or distance, just enjoy being out exploring.

HENRY: Keep going. Start with some short runs and build up to longer runs

Why have you chosen to run for Spread a Smile?

JASON: My nephew was born with heart difficulties and spent his five weeks at Great Ormond Street Hospital.  The support that the hospital and charities gave to my sister and brother-in-law at the time was wonderful and inspired us all to look for ways to help those who bring comfort and joy to ill children and their families at such a difficult time.  So when my employers (Masthaven Bank) partnered with Spread a Smile in 2019, this gave me the opportunity to combine my love of running with fundraising for the charity.  I was lucky enough to spend a day with some of the Spread A Smile team on one of their hospital visits in early 2020, and seeing the impact they had made the decision to volunteer for the London Marathon even easier.

SIMON: Opticore IT who I work for are affiliated to Spread a Smile so I’ve heard about the work they do and I wanted to help in someway. The last 18 months have been incredibly tough for everyone but just imagining having a seriously or terminally sick child on top of that must be that hardest thing in the world. I just want to do my bit to help.

HENRY: Because my Mum works for them and she told us about all the children they  support. Our friend Oliver was also entertained by a Spread a Smile magician when he was ill in Great Ormond Street.

What makes you smile?

JASON: I think the answer I’m supposed to give here is “my wife and children”…..which is, of course, true, but thinking about the day of the London Marathon, I’m hoping to be smiling when I cross the start line (knowing that I’m finally really doing it), when I see people I know in the crowd (in case they’re taking photos) and – probably the biggest smile – when I cross the finish line.  At that point, it’ll be a combined feeling of relief together with the knowledge that I’ve raised funds for Spread A Smile…. not to mention the thought of some refreshments being not too far away

MARTIN: Fran & Ellibobs, most of the time….

HENRY: My friends, my brothers and when my Mum says I can go on the Xbox!