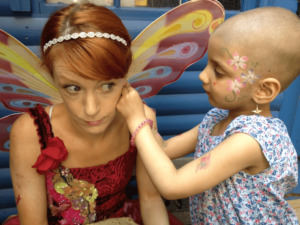 On Friday 17th November, Spread a Smile was featured on the BBC Children in Need Appeal Show in an incredibly moving film featuring Vanessa Moss and her family.

We first met Vanessa when she was four years old, not long after she started treatment for neuroblastoma at Great Ormond Street Hospital and shortly after the charity was first established. Vanessa was undergoing gruelling treatment at the time and was missing her two sisters, Ruby and Zoe. She loved the Spread a Smile visits as they helped her take her mind off her treatment.

As part of this year’s Children in Need Appeal Show, the BBC approached the Moss family, to make a film about how Spread a Smile entertained courageous young Vanessa and made a positive difference to her during her time in hospital.

The filming took place during the summer of 2017. Vanessa tragically passed away in September, but the Moss family courageously allowed her story to be aired.

During the film, we heard from Vanessa about the difference the Spread a Smile visits made to her. She said “Spread a Smile are just brilliant. They give me a little break from worrying about what’s going to happen. They make every child happier – ten million times happier.”

One of our entertainers, Collette is featured in the film with Vanessa singing On My Own from Les Miserables with Vanessa. Collette said “every single child is so precious in their own right and we want to make sure that when we go in there, they know how special they really are.”

Vanessa’s mum, Anna, summed up Spread a Smile’s work: “A child still wants to play, still wants to smile and still wants to spend their days laughing despite being very sick… Probably the most valuable type of help at that time in our life was when the extraordinary team from Spread a Smile came into the hospital and just made a difference at that moment and let my daughter be a child again. That for me as a mother is the most precious gift my daughter could have during a very very tough time.”

Vanessa’s dad, Parker, told us, “Spread a Smile’s entertainers were one of the only things that could raise a smile in our daughter during her chemotherapy. Their fairies are angels of kindness, and their magicians conjure away the pain with every visit. It’s hard to explain how slowly time passes on a children’s oncology ward, but Spread a Smile silenced the ticking of the clock, and remained at our daughter’s side to sprinkle a little fairy dust and make her feel for a few moments like the luckiest girl in the world.”

Parker spoke at our fundraising dinner in the summer and told our guests that what we do is create “more than just a smile… it’s about feeling lucky and being loved… it’s a really truly important thing that Spread a Smile do. They will be my daughter’s morphine for the next few months.”

We continued to visit and entertain Vanessa during the four and a half years of her treatment for cancer, and built up a close and sustaining bond with the Moss family during what was an incredibly difficult time for them. As well as entertaining Vanessa in hospital, we invited her and her whole family to special days out to the theatre, to shows such as Disney’s The Lion King, and Vanessa’s favourite musical Les Miserables. These trips provided the chance for the whole family to experience a joyful occasion together, find a moment of respite and create lasting memories. We’re particularly aware how deeply affecting it is for siblings to experience the illness of their family members, and therefore know how important it is to include them in our work.

We were fortunate enough to be awarded a three-year grant from Children in Need in 2015, to help us entertain more children in hospitals and we are incredibly grateful to the entire team at Children in Need for their support and for helping us raise awareness of our work.

We would also like to thank the Moss family for sharing their stories with Children in Need. It has been a privilege for us to entertain Vanessa. She has been such an inspiration to the whole team at Spread a Smile.