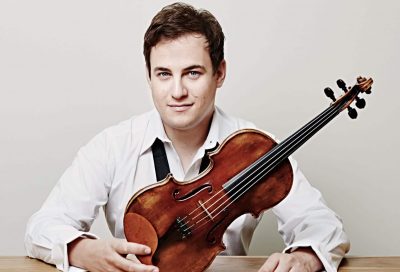 On Saturday 18th November, Highgate Golf Club held their annual charity concert in aid of Spread a Smile alongside two other charities: The Harington Scheme and The Wigmore Hall Trust. The concert, the 17th one organised by George Meyer, featured internationally acclaimed violinist Jack Liebeck.

Jack is a renowned soloist and chamber musician and has performed with all the major British orchestras. As well as being a technical master of the violin, he is a dedicated educator, holding a professorship at the Royal Academy of Music.

A dinner followed the wonderful programme of music, during which a raffle and auction were held to raise funds for the three chosen charities. John Plews, Artistic Director of the Highgate theatre ‘Upstairs at the Gatehouse’, acted as auctioneer on the night. Auction items included tickets for the Holland Park Opera, a week’s holiday at a nine-bedroom chalet in Meribel, Grandstand tickets for the England v Pakistan Test Match at Lord’s, a two-week break at a luxurious lodge in Grenada, a meal for six guests at Peruvian restaurant Coya, a night at the country retreat Sopwell House in Hertfordshire, and a Porsche driving experience at Silverstone.

Spread a Smile’s Lucy Jackson spoke to the 120-strong audience about the charity’s work entertaining seriously ill children and teenagers in hospital, and particularly about a little girl we visited, Vanessa, who had been featured as part of BBC Children in Need’s Appeal Show the evening before. Nine-year-old Vanessa tragically passed away in September after living with cancer for over half her life. Vanessa loved music, so when we visited her during her treatment for the rare form of cancer, Neuroblastoma, at GOSH, we took in singers and musicians to alleviate the boredom and monotony of hospital and take her mind off her treatment.

We are very grateful to Highgate Golf Club for their support of Spread a Smile. Ladies’ Captain Amanda Salmon chose us as the Captain’s Charity for the Golf Club this year and the club has raised money for the charity through a number of other avenues: Ladies’ Wine and Dine evenings on Tuesdays from May to September; a special golf day event on 15th September, organised by Peter Levinger; a raffle organised by Amanda Salmon; and a donations bottle on the bar. We would like to say an enormous thank you to George Meyer for putting on this fabulous event and for supporting Spread a Smile.