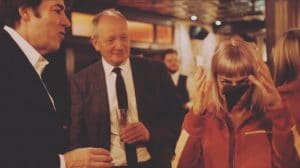 My name is Louise Andrée Douglas and I’m a magician and illusionist. I was quite late to the magical party, so to speak. Growing up, I didn’t see many magicians, apart from the likes of Paul Daniels on the television and the odd part-time magician who’d do magic at the local Chinese restaurant where I grew up! I certainly didn’t see female magicians performing. Apart from the glamorous Debbie McGee and other magicians’ assistants, there really weren’t any female magic role models.

Despite my exotic middle name, I am Scottish born and bred. I moved to London in 2008 to work as a dancer and choreographer, which is where I caught the magic bug. I was cast in a BBC show called ‘The Magicians’ in 2011, as they wanted a trained dancer who could move well to be the magicians’ assistant. I got to work with some of the world’s best magicians and illusionists, seeing their tricks up close, and I was hooked. It was like the most amazing crash course in magic, experiencing all the diverse styles and ingenuity of the different magicians. I started trying my own close-up magic in the park whilst watching the London 2012 Olympics on the big screen, practising on the other people watching. Experiencing that moment when the person you’re performing to is genuinely suspended in disbelief – I just loved it!

I really wanted to be involved in more magic and saw an advert for auditions for a project to put together a group of female magicians, to encourage more women to get involved with magic. I was incredibly lucky to be given that opportunity and work with two amazing magicians, Jamie Allan and Adam Heppenstall, who were brilliant mentors, and soon ‘Chicks n Tricks’ was born. As part of ‘Chicks n Tricks’, I performed with two other women and we enjoy playing with the traditional assumptions surrounding magic and gender. The woman is no longer just the magician’s assistant to be put in the box! As female magicians, we have to rethink how we present our magic  – for example, male magicians normally wear suits with plenty of pockets to store their cards and props and transition between one trick to another seamlessly; however, we often perform in dresses with no pockets so we adapt to a handbag or think of ingenious ways to make sure things run smoothly!

Magic can be quite a small world and many magicians are acquainted on Facebook and Instagram. I knew Spread a Smile regular, Martin Rees, through Facebook and loved all of his Guinness World Record magic tricks and posts about Spread a Smile. Soon after, I saw the Children in Need Appeal Show and the film about Spread a Smile’s role in Vanessa Moss’s story. I was so touched by the film; I couldn’t stop thinking about it. Strangely, a few days later, I had a call from Martin saying that Spread a Smile were looking for more entertainers, and specifically a female magician! He put me in touch with Josephine and it all went from there.

As soon as I met Josephine, I just knew that Spread a Smile was something I wanted to be involved in. Her passion, drive and enthusiasm were so contagious. I left our meeting feeling on top of the world – like I could do anything! She told me what a difference Spread a Smile entertainers can make, and it sounded like something I would love to do. Magic is fun to perform but normally I perform for corporate events or big stage shows. I felt like this was a chance to use magic to genuinely make a difference.

I was quite nervous before my first visit, as even though I’d had lots of advice, I just didn’t know what to expect. My first visit was to Great Ormond Street Hospital in April and I was on a team with fellow magician Martin and singer Sam, with Josephine escorting us. I absolutely loved every minute of it and all nerves completely vanished as soon as I got on the wards.

The children were just incredible; I couldn’t believe it. I expected to feel a bit sad or maybe even awkward, and was worried I’d say something wrong or not perform appropriately, but the kids and their families were just so welcoming. Even though some of the children were in the middle of gruelling treatment or just about to go into surgery, they were just so enthusiastic and fun!

On that first visit, we met a family who were just incredible: a little boy in oncology and his brother. It really hit home after meeting them how important it is to entertain siblings and families, as well as the child who is the patient. The boys were so funny and kept asking to see more and more magic, and were singing songs and taking selfies. Their mum, dad, gran and grandad soon joined in too! It was just such a lovely family moment for them. It felt like one big party. That visit will always stick in my mind partly as it was my first, but also because I thought, no matter what happens in the future, that family have made those special memories together and it was such an honour to be part of that.

Having been on more visits now, I realise that sometimes you have to be very adaptable. I had never performed magic in rubber gloves before, for example, or through a glass window – sometimes essential when a child’s immune system is particularly low so we can’t go into the room. It’s a challenge, but a challenge that is worth it to see a smile creep up on a child who might be feeling really rubbish that day, or a child who has said they don’t want to see any entertainers but then catches a glimpse and changes their mind!

The most difficult thing about going into the hospitals is seeing children who were full of beans last visit, having a particularly bad day. Because of the fun and laughter that’s created during our visits, it’s easy to forget sometimes how poorly some of the children are. Their bravery totally astounds me.

The positivity and strength of the children I’ve met on my visits is absolutely unbelievable. One of my favourite memories was from a little girl I met in one of the oncology wards who said she totally believed in magic and especially ‘the magic of friendship’.

The Spread a Smile team are incredible: every single person I have met has been absolutely lovely as well as talented. And Josephine and Vanessa, the charity’s co-founders, are total angels here on earth!

I joined Spread a Smile because I wanted to use my magic to ‘give something back’ and make a difference without gaining anything in return. I feel bad now, because I have actually gained so much! The reward of seeing the smiles and knowing you have helped to make a difference, even just for five minutes is such a lovely feeling. My favourite thing about working for the charity is the laughter you hear throughout the ward when Spread a Smile are there!