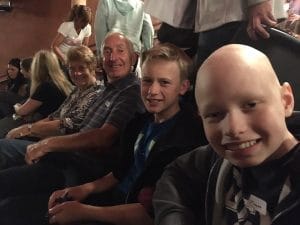 In September Finn, 12, and his family joined us on our very first outing to School of Rock. Finn’s mum, Jo, tells us what the trip meant to her, Finn and the family.

Getting an invitation to a Spread a Smile outing is always exciting, but never more so than when you’ve been away in Germany with your son for four weeks, with another three still to go, halfway through him undergoing 30 radiation proton beam treatments. And it was to go as a family to the musical ‘School of Rock’.

Me (mum), Dad, brother Tom and especially Finn were all super excited as we had wanted to see this show for ages, but since Finn’s diagnosis of soft tissue Ewing’s sarcoma in January, such family treats and days out have been very limited as Finn gets so tired, and is just sometimes too ill.

So come Monday 3rd September, we all caught the train into London, buzzing with excitement, to meet the Spread a Smile team at the Gillian Lynne Theatre in the West End for pre-theatre dinner, the best kind – pizza! Spread a Smile entertainers were there to delight and wow all the children whilst waiting for the performance to start. The magician Martin is one of Finn’s favourites; he never fails to impress and astound us all.

Then we were off into the theatre, drinks and snacks in hand, for the performance. School of Rock, based on the hit movie, follows failed wannabe rock star Dewey Finn as he becomes a supply teacher to make some extra cash. Unbeknownst to the students’ headmistress and parents, he and his young pupils form a rock band to enter a battle of the bands competition.

The show kicked off impressively with the ‘school children’ being delivered to school by their parents, through the aisle right beside us! From there, we watched avidly as the seriously impressive children sang, danced and acted their way through the play, with a very convincing Dewey Finn, played by actor Craig Gallivan, leading the way. The phrase from the song, ‘Stick it to the Man’, has since become overly used in our household!

During the interval, the Spread a Smile team delivered School of Rock ice cream to us. Since starting his treatment, Finn has struggled with low appetite and his taste buds have also changed. Treats such as pizza and ice cream are always welcome though, and he seems to eat more when distracted and happy.

To top it all off, the Spread a Smile team had arranged for the children to meet the cast after the performance! Finn was over the moon to meet the lead actors, and find out about how the children in the cast manage to perform such late nights and matinees and still go to ‘real school’.

There were happy faces all round. The children know this is something very special to be invited to, something that even their friends (who can do ‘everything else’) can’t get access to. And us parents are truly grateful that our children have the chance to feel special, and take a break from their new, less active, routines. A Spread a Smile event always has fun and delight at the top of the agenda, whilst unfailingly taking care of each child’s individual needs.

Thank you to everyone who gets behind this amazing charity; it really does make a huge difference to the lives of the children and their families.

Finn, his brother Tom and their parents were among 37 guests to be treated to the VIP outing to School of Rock. A big thank you from us at Spread a Smile goes to Ashley Herman at Encore Tickets, the wonderful staff at the Gillian Lynne Theatre, the Andrew Lloyd-Webber production team, Lola’s Cupcakes, and our Spread a Smile entertainers Martin Rees and Collette Spinner. Thank you also to the fabulous performers from School of Rock who took the time to meet the kids after the show, and even have a sing-along with our young guests.

Any cookies that may not be particularly necessary for the website to function and is used specifically to collect user personal data via analytics, ads, other embedded contents are termed as non-necessary cookies. It is mandatory to procure user consent prior to running these cookies on your website.