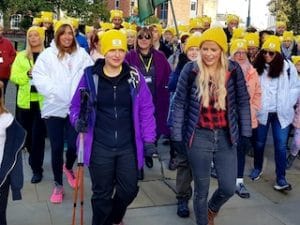 On Sunday 7th October, Amy Foster led a ramble for BBC One’s Countryfile in the Cambridgeshire countryside around Ely Cathedral. Her inspirational story was chosen by BBC Children in Need to be part of a special episode following youngsters helped by charities, like Spread a Smile, that have benefitted from Children in Need funding.

Tune in to Countryfile on BBC1 this Sunday (28 October) at 5.45pm to see the ramble.

We met Amy in early 2017, when she was 12 years old, shortly after she had been diagnosed with Osteosarcoma in her femur. We entertained her during her lengthy stays at University College Hospital where she received chemotherapy and radiotherapy. Amy said of Spread a Smile’s visits, “Spread a Smile make a massive difference because without them there wouldn’t be any colour in any of it. It would be just like it was all grey and black.”

Amy endured major surgery to remove the cancerous femur and now has an internal prosthesis. She has made an astounding recovery since the operation and, although she walks with a limp, she has worked hard to regain a range of movement in her leg that was thought impossible.

Amy, whose story was highlighted on Countryfile on BBC1 on 16th September, led a group of 1,094 ramblers on a three-mile hike around Ely. She was joined by her family including mum Kathy, dad Simon and sister Freya; and Spread a Smile was there to take part in the challenge.

The atmosphere was phenomenal. There were ramblers of all descriptions – families with babies in buggies, people in wheelchairs, pensioners – but all had one thing in common: they had all signed up for the ramble after hearing about Amy’s story on the programme. It was quite a sight; every rambler had been given a Pudsey hat, so there was a sea of yellow wherever you looked!

Simon Antrobus, the CEO of Children in Need, spoke to the ramblers at the start and then the crowd were off with Amy at the head. Despite the hike taking place in the fenlands round Ely, it was by no means plain sailing, and Amy did amazingly well during the three-hour walk. Ellie Harrison, one of the Countryfile presenters, interviewed her and her family as they walked. They talked about her time in hospital and her love of Spread a Smile.

Excitingly, the programme had lined up a couple of famous well-wishers to cheer Amy on her way. Kathy, Amy’s mum, said, “The girls [Amy and sister Freya] were thrilled that both comedian Sara Pascoe and Strictly Come Dancing’s Anton Du Beke took the time to call and cheer them on when they are so busy. They both know how kind and generous Sara is as she took the time to message and visit Amy in hospital and that meant the world to them both. They are both now desperate to meet Anton and have a dance!”

As Amy and her family neared the finish at the Cathedral, there was a welcoming party: all the other ramblers had gathered ahead to cheer courageous Amy over the finishing line. Kathy said, “It was an incredibly emotional moment crossing the finish line with the Spread a Smile team alongside us and Countryfile’s Ellie Harrison. I think the whole of the last 18 months just whooshed through me and spilt out in a rush of tears. Joy at the amazing determination and courage Amy has shown and the look of triumph on her face will stay with me for a long time.”

After the ramble, everyone gathered for a big picnic in the grounds of the Cathedral, and our wonderful Spread a Smile entertainers were there to add to the fun. Collette and Ellie sang; Martin performed close-up magic; Judge the Poet wowed the walkers with his words; Natalie spread some fairy dust; and Marina painted hundreds of faces!

It was a truly wonderful day. Thank you for taking part in this challenge for us, Amy, and showing such strength and bravery during the walk. The ramble will be shown on a special Countryfile episode on Sunday 28th October on BBC One at 5.45pm. We hope you all tune in to watch!