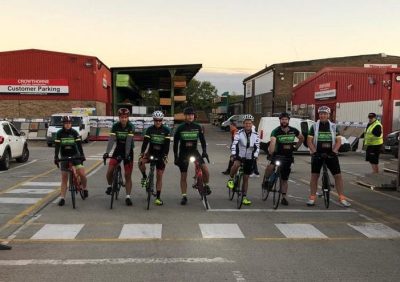 A dedicated team of cyclists from our wonderful corporate supporters, timber and building merchants, Lawsons, and their associates Marshalls Paving, cycled 200 miles over two days to raise money for Spread a Smile.

The group of eight included David George, Mike Kelly, Ian Scrimshaw, Nick Walker, Stacey Clare, Martyn Butler and Dan Gillings from Lawsons, and Keith Brophy from Marshalls. They were accompanied by a Lawsons support crew of Dave Negus, Luci Jones and Kat Rowe, as well as our very own Collette Spinner from Spread a Smile.

The intrepid riders trained together for a couple of months in Bedfordshire, to get some idea of the first part of the route and what the ride would entail. Although perhaps no amount of training can prepare you for 200 miles of cycling on two consecutive days!

The challenge began bright and early from the Crowthorne branch in Bedford on Thursday 27th September. The cyclists set off as the sun was rising; a beautiful start to what would be two days of glorious autumn weather. The first stop at 25 miles was on Dunstable Downs, where the team caught their breath whilst taking in the beautiful views from this vantage point. Morale was kept high en route by the support team who drove the course, stopping at various locations to cheer them on. Collette said they were often surprised by the cyclists arriving sooner than anticipated – they were keeping to an average speed of 22 mph over the first 100 miles! They stopped again at 50 miles to grab lunch at The Deli in Chalfont St Giles, where the staff were so impressed by the endeavour they made a donation. After one more stop at 75 miles, the first day finished at the Lawsons branch in Crawley, Surrey and the team had a well-deserved dinner of lots of carbs and protein!

The second day was much harder with the knowledge they had to do it all again. Off at 7 am once more, they headed from Crawley to another Crowthorne branch – this time in Ascot – for lunch. Some of the riders were seasoned pros and some were less experienced, but the group stuck together for the entire route, and took turns leading the peloton. Amazingly they reached their final destination of the Lawsons branch in Colney Heath, at 4 pm – much earlier than predicted – to complete 200 miles of epic cycling!

Despite it being a difficult and strenuous challenge, the cyclists’ camaraderie kept them going – even a grassy fall for Ian was laughed off! They looked remarkably fresh as they crossed the finishing line, where Collette had promised to meet them with a cold beer. David George said of the ride, “What we’re doing is the easy part; Spread a Smile does great work which is incredibly hard. It’s an honour to be doing this.”

These Smile Heroes have already raised over £4,000, towards a target of £10,000. Help them reach their goal – click to donate here: https://mydonate.bt.com/fundraisers/lawsonsmilesforsmiles