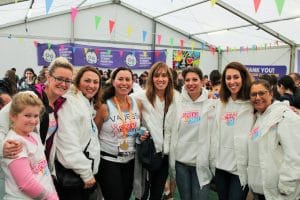 On Sunday 14th October, 20 runners ran miles for smiles in the Royal Parks Half Marathon in London. It may have been a rainy day, but it didn’t take away the smiles on the faces of our runners and their supporters.

One of the runners on Sunday was Spread a Smile’s very own co-founder Vanessa Crocker. Vanessa said, “I’ve never been a runner, and never thought I could run. Over the last five years, since founding Spread a Smile, I have felt humbled by all the supporters who have chosen to take on amazing challenges for Spread a Smile, so I decided it was time for me to face one myself!

“I started training in May. At first it was a real struggle going out to run for a few miles; I just didn’t have any confidence. When I told my friends I was going to do a half Marathon, I’m not sure many of them believed me! But after the first few faltering attempts, I found my feet and started training with one of my daughters, Ally.

“In my practice runs, I had been covering distances of ten miles, but on Sunday by the six-mile-marker, I was finding it very difficult. The knowledge that I had another seven miles to go with the rain still coming down was almost too much. Then I thought about what I was racing for: thinking about the children we visit was all the inspiration I needed, if they could face their challenges with such strength and courage, I could certainly finish the thirteen miles.

“The sense of achievement I felt at the finish was immense and it was so lovely to see the Spread a Smile team to cheer me over the line!”

We were particularly touched that Heidi Pook and Thomas Hanbury, parents of two children we have entertained in hospital, chose to race for Spread a Smile too.

Heidi was inspired to run for us after witnessing what the charity did for her nine year-old daughter Trixie, while she was receiving treatment for her brain tumour at University College

Hospital. She said, “Spread a Smile gave Trixie some amazing opportunities. They helped her stay focused and positive, and distracted her from the horror of her treatment. It made her time in London feel like a fairy tale. Spread a Smile made such a difference.”

Heidi, along with five friends, ran in customised ‘Team Trixie’ Spread a Smile vests and raced with JoJo bows in their hair, as Trixie is such a big fan of JoJo Siwa.

Heidi said, “We loved every minute of it! We were lucky that we were able to shelter out of the rain before the race, and we then ran in the sun. The crowd and the atmosphere were amazing. Four of our team stuck together and by the final mile the run was going so well, we were encouraging other runners towards the finish. Team Trixie ran over the line holding hands in celebration! I had such a great day, I’ve already signed up to run the Half Marathon for Spread a Smile next year!” Well done to Heidi who ran a personal best of 2 hours 11 minutes, and a massive thank you to Team Trixie who raised an incredible £5,000, smashing their target of £2,000.

Thomas Hanbury, dad of Keeva who we entertained during her lengthy stays at Great Ormond Street Hospital where she received treatment for cancer, also raced for Spread a Smile, with friends Stephen Sheppard and Damien Wright. Thomas said, “I have seen first-hand how children are transformed from the boredom of their rooms to be fully engaged and entertained when one of the Spread a Smile entertainers comes in to the room. The joy they bring lasts for days and the children count the days until the next visit.”

If you are inspired by their feat and want to take on your own challenge in 2019, you can register now for the Royal Parks Half Marathon 2019, which will take place on Sunday 13 October.